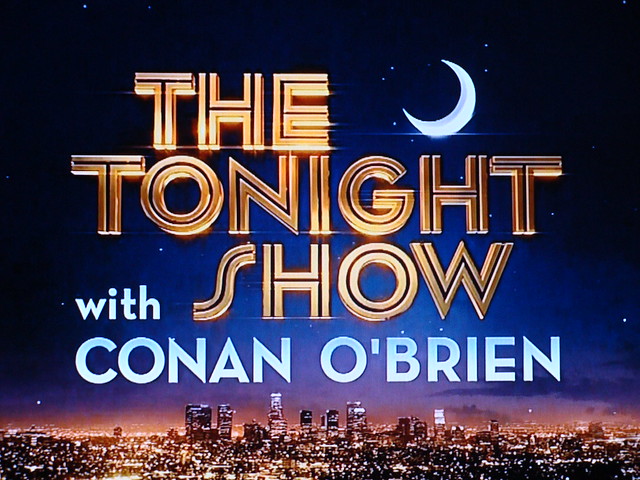 Some might say that The Tonight Show, in its mythical, beloved form, ended years ago, when Jay Leno bashed it down into a formulaic, unfunny pulp.  But at the very least, I think we can all agree that going forward The Tonight Show no longer really exists.  The brand is sullied.  No one cares anymore.  And probably because I’m not old, and I never watched Johnny Carson, I don’t really care all that much, either.  It never meant anything to me, really.  The scene has splintered, and while some bemoan the loss of a cultural institution, all I know is that now I can watch Letterman, Stewart, Colbert, maybe even a bit of Kimmel or Ferguson or Fallon here and there.  And in a little more than seven months, I’ll probably be able to watch Conan again.  I have a computer.  I have a DVR.  The more the merrier, guys.

That doesn’t mean that what happened to Conan was fair.  Considering that NBC has seemingly done everything possible to undermine his ability to produce a successful show, I think he’s handled himself well throughout this.  And so has Leno, in his own way; I mean, I think he’s kind of a scumbag, but I wasn’t going to watch him anyway.  He’s portraying himself as a victim, and his is audience is still on his side.  I have no doubt he’ll pull ratings that are higher than what Conan was getting prior to all of this mess.  But his audience will just keep getting older, and advertisers won’t want to advertise for them, and the death of traditional late night television will be accelerated even more.  Oh, NBC.

Anyway, I thought I would do another not-at-all-live live blog with my thoughts during the last night of The Tonight Show with Conan O’Brien.  Also known as probably the last night of late night television as we once knew it.  I’ll put in some Hulu clips if they get posted; since NBC has continued to somewhat bafflingly put this stuff online, I have to assume they will continue to do so.  I’ll also disperse a few photos I took throughout.

Update: Not surprisingly, NBC has taken the videos below off of Hulu.  I’m leaving the dead remnants up, though, because it seems appropriate.

11:35 – Our last time hearing this theme song, I would imagine; NBC surely owns it.  My favorite Conan opening was the Late Night one where he was running around New York and eventually jumped into the river.  He comes out to a standing ovation and Johanna and I both feel very sad. 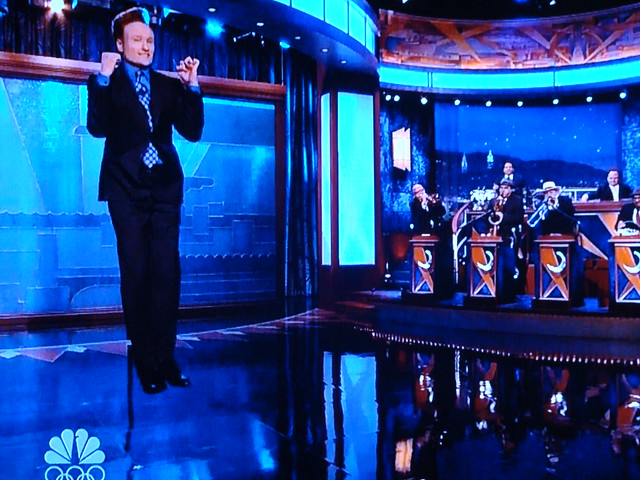 11:36 – The crowd is hyped, probably helped by The Tonight Show’s audience warm-up comedian Jimmy Pardo.  Johanna and I are both huge fans of his podcast Never Not Funny, and are sad about him losing his warm-up gig and having to go back to road comedy.  Go download the podcast (also available on iTunes).  Listen to the free samples, and then pay for the full version.  It’s worth it.

11:41 – I was sitting here typing a sentence about how people need to calm down about these bits where Conan tries to spend as much of NBC’s money as possible because they obviously aren’t real, and then he went ahead and admitted it.  So that settles that.

11:44 – A montage of his seven months hosting gives me an opportunity to talk about the show as a whole.  A lot of people, even big Conan fans, have been saying that he just hasn’t been good at 11:30.  I completely disagree.  I think he has been funnier since taking over The Tonight Show than he’s been in years.  Late Night was getting a bit stale, and I think he’s really taken advantage of the new location and the (very obviously) larger budget.  My favorite bits that Conan does are the unscripted off-sites, where he just goes out and interacts with people, and it seems like he’s been doing two or three of them a week.  Plus, I’ve really loved the return of Andy Richter, and I was not sold on that at all when I first heard about it.  I’m guessing a lot of people that are complaining about the show weren’t even watching it regularly, and just know that the ratings were down.  And that will be the legacy of the last seven months, which is a shame.

11:45 – My dog suddenly got really interested in this montage, which makes me realize that Conan is the only Tonight Show host that he’s ever known.

11:53 – Steve Carell out to do an exit interview.  I haven’t even seen where this is going yet, and I already love it.  Exit interviews are fun, because everyone always claims that they are going to rip their company apart when they finally get the chance, and then when the time comes they decide that it’s not worth the effort and they just want to get out of there.

12:00 – Tom Hanks (who coined the now famous nickname Coco), comes out looking like Charlie Wilson, and carrying a couple of glasses of what appear to be Scotch, although Conan jokes that it’s cream soda.  They offer some to Andy, but he says he’s got it covered and reveals a flask in his pocket. 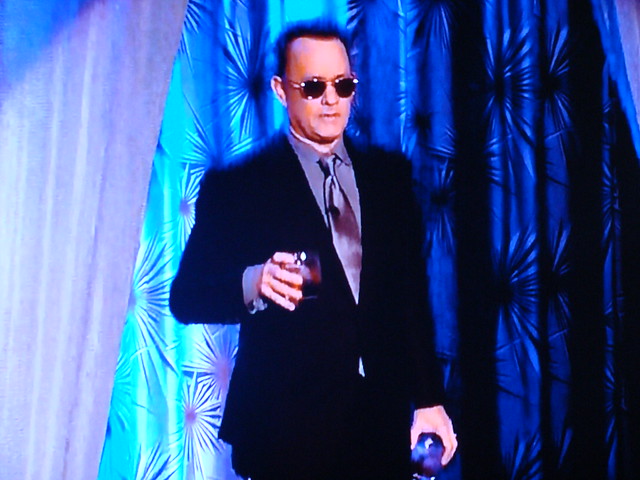 Hanks says “Conan, in our house you will always be the host of The Tonight Show.”  What is Leno thinking right now?  Are his feelings hurt?  Is he starting to realize he’s been a bit of an asshole?  I doubt it. 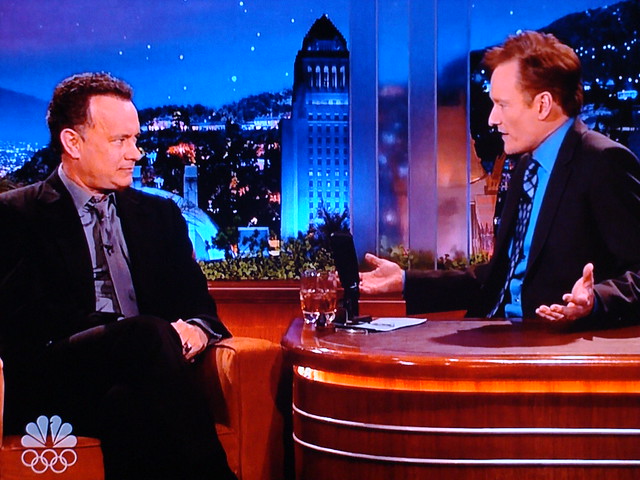 12:17 – Neil Young was the first to call Conan to support him when the rumors of his show getting cancelled came out?  What?  How close are Conan and Neil Young?  They seem like an odd couple.  Also, I’m enjoying this performance more than I would have expected, but I think I’ve seen/heard enough Neil Young for one lifetime.  His guitar solo in “Cinnamon Girl” isn’t the only thing that’s one note about him.

12:25 – They come back from commercial with a staff photo.  I feel bad for everyone that had to move their families out to L.A., although I guess Conan did his best to negotiate generous severance packages for them.

12:26 – Conan tearing up while talking about his time hosting the show and his time with NBC.  How bizarre is it that this is on television right now? 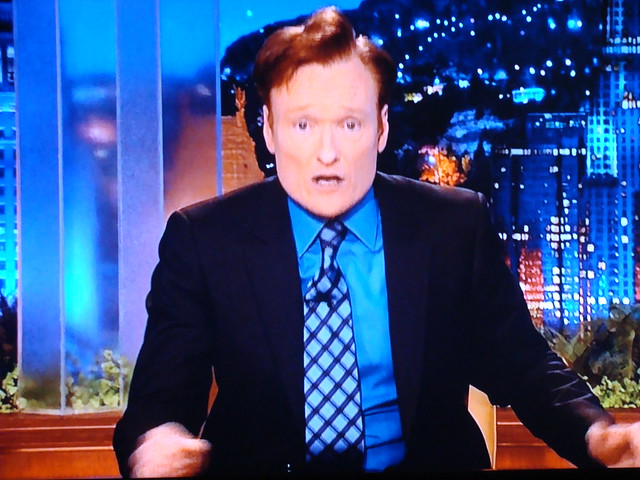 12:29 – A great moment as Conan asks his viewers to not be cynical.  I’ll do my best to follow that advice.

12:30 – Will Ferrell, the best in the business at lightening the mood.  I love how he absolutely refuses to ever be serious.  This is the man that was wearing an American flag Speedo in the first episode of SNL after September 11th. 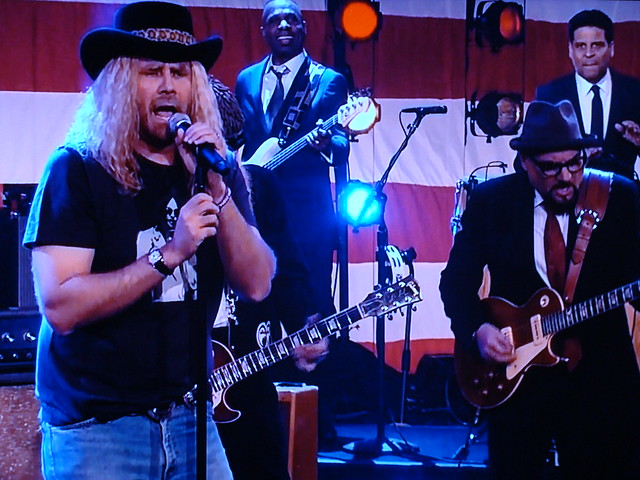 12:35 – I hate “Freebird,” even when it’s being performed ironically, but this is a great, raucous way to go out.  I also loved Fallon and the Roots’ Motown version of “Yesterday” to open Late Night.

Johanna’s closing thoughts: “If you had told me a year ago that Jimmy Fallon on Late Night would outlast Conan O’Brien on The Tonight Show, I never would have believed you.”  My closing thoughts, after seeing Conan’s face on ?uestlove’s drum kit:  “Conan should just go away and never come back.  He would be a legend.  He’d be the J.D. Salinger of late night talk shows.”

Like I said, I’ll do my best to not be cynical about this whole thing.  And I don’t think Jay Leno is evil or anything.  I think he’s more manipulative than he lets on, and I think he has a creepy desire to be loved.  But I also think he was put in a pretty bad situation by NBC, too.  The frustrating thing about Leno is that it almost seems like he’s not pretending, and he actually believes that he is as much a victim in all of this as Conan is.  I’ve dealt with people like this in my life, and there is nothing more frustrating than someone who is so in denial that they will never even consider the possibility that they’re wrong.  Leno is the people’s hero in his mind.

I’m also bothered by Leno’s audience.  Johanna and I were discussing whether or not this whole thing would hurt Leno’s ratings.  It might, I guess.  But in the end, I think Leno’s crowd is so not keyed in to reality that they probably have no idea any of this is even happening.  They’ll watch the Olympics, and then they’ll realize Leno is somehow back on at 11:30, and everything will go back to the way it used to be for them.

But I’ll be watching Letterman.  And then hopefully, in seven months, Conan.

2 thoughts on “The (Last) Tonight Show with Conan O’Brien”