Note to self: don’t try to do these entries when you’ve just finished sorting through your day’s worth of Google Reader and have like thirty tabs open and tons of stuff running on your computer.  It makes YouTube videos take FOR-EV-VER to load.

I mentioned in a different post that I heard a whole lot about Janelle Monae before I actually heard anything by Janelle Monae.  Johanna only recently bought this album, and I’m still trying to form my opinions.  But I like this song quite a bit, more than I did her previous single, “Tightrope.”

And, while obviously very different in tone, the video reminds me quite a bit of the famous D’Angelo video for “Untitled (How Does It Feel)”.  I would post that video here, but EMI has disabled embedding.  It’s absence has nothing to do with my comfort level with my own sexuality.

This has been all over the place lately, but it’s a fun watch/listen, so I figured I would pay it forward.  It sparks a bit of a philosophical battle in my brain, as I’m always both attracted to and repulsed by masturbatory NYC lovefests like this. 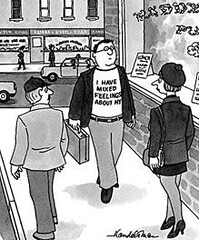 This is such a great song and obvious single that I was shocked when I was putting together one of these entries back in May and discovered that they hadn’t yet made a video for it.  I ended up including a live performance instead.  Finally, the video is here.  Like I said, I love the song, and I am mildly charmed by the video, but the two don’t seem like the world’s greatest match.

OK, so I don’t know much about these young ladies.  I don’t own the EP from which this song comes.  I’m not even that into this song.  Why post this, then?  Because it’s an excuse to let you know that “Undertow,” a song that I like a lot more than this one, is available to download for free on Amazon right now.  Check it out, it’s really good.  It’s the first single off of their upcoming album The Fool, due out October 25th.

And finally, here’s Kanye West performing “Power” on Saturday Night Live, because it’s more of a music video than a live performance anyway.  Man, he killed it.  This was the highlight of a pretty mediocre episode.

Let me also take this opportunity to say that whomever edited the trailers for The Social Network and decided what music to use deserves an Oscar or something.  Or at least a nice, hand-written “Thank You” note from David Fincher.